During these 100 degree days, for the safety and comfort of visitors, volunteers and staff, Campbell House may be closed or may offer fewer hours than usual.. We are happy to issue a raincheck with your paid admission so you can return another day.

The MAC’s collection of cloth flour sacks offers a unique window into the early development of Eastern Washington’s wheat industry, which today contributes hundreds of millions of dollars to the state’s economy.  The sacks are also a tangible reminder of the mills that played a critical role in Spokane’s early growth.   Approximately 20% of the sacks in the MAC’s collection were intended for markets in China and other countries, reflecting the early importance of the export market for Washington wheat.

Pacific Northwest mills exported flour to the Chinese market as early as the 1890s, and, generally, the trade was brokered by Hong Kong merchants. The image on the sack below, the Chinese characters, and the Cantonese phrase, "Chong Yuen", harken back to imperial China, when top scholars were personally examined by the emperor. The winner was proclaimed "the best of the best" and stood upon a stone carving of a fish head at the palace. The implication is that this brand of flour is the very best.

These graphically striking cloth sacks date primarily from the first half of the 20th century and most are in pristine condition. Several vintage objects made from recycled flour sacks, including a rare dress c.1880s, will also be on display, as well as art and images from the MAC’s permanent collection. 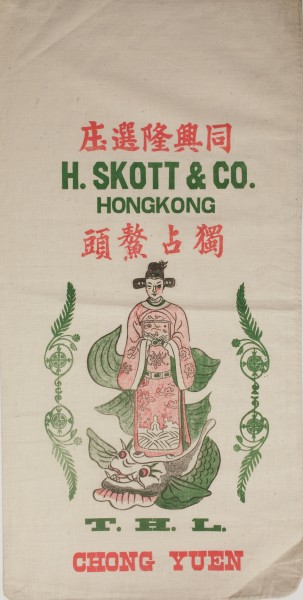