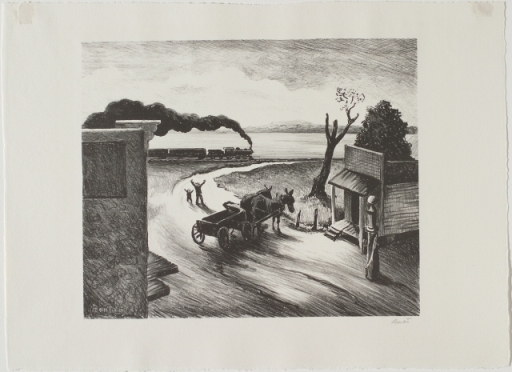 On the outskirts of town there lived a small family of 4, a mother and father and their two sons. They were not the most wealthy of families; actually they were barely able to get by. The parents were not able to buy their childten the toys and gifts that they would have liked to. The children had to think of their own ways to entertain themselves. On warm days they enjoyed running and playing with the multiple farm animals they had and other days they would simply go in their rooms and play with cards or blocks. Although these things would get them by, the most exciting of all their games happened to be watching the ever so rare train pass and counting the number of cars aboard the train. Since the train only went past every couple of weeks the children would become overly excited when one would pass; like today.

It was a Eureka moment for them. They were in a poor state with little food a broken shelter and little pay. But as they say, "Never say never", because that was the day he and his child had a turn of fortune. Their great great uncle had past away and left them the holders of his Victorian home in Vermont.

In a very small town lived a man and his son. They had a lot of fun together but didn't have anything but two horses and a small house. One day a man came and said that there was going to be a major gold rush in the next town over. Everyone packed up to leave and go make some money but the little boy and his dad didn't have any money to buy train tickets. They spent many hours thinking of how to make some money to get over there. When everyone was leaving town they were digging a hole in their backyard and found gold in the yard. They ran after the train to tell their few loved ones they didn't need to leave but never caught up to them. So even though they became wealthy they were lonely and lived with their gold only for a long time.

their are two guys a father and probably his son. they wanted to catch a train to go visit some relatives and their horses decided that they arent going to go any farther and they stop at the hitching post then they have to start running and as the do they see that the train is on his way. and now they have no chance and they start to wave their arms and the train is going as fast as it can and doesnt see them and passes them by. THey are both dissapointed and decide that they must go home and get some new horses because their old and cant seem to get to the depot on time.

It was a very dark and gloomy day when a man and his some came riding on there wagon when a storm hit so they had to stop at this little town and when they were lookin for a place to rest they couldnt find anybody in the town so they sat and waited for someone to come but nobody came. Then suddenly a train came by and they tryed to get the trains attention but the train didnt notice them so the train kept goin on its way. So the man and his son stayed stranded

Damnit, wait for me! I like trains too. why are you being such a train hog. You selfish jerk, let me have some train!

Before the rail road was established horse and carriage was the only transportation we knew of. Through months of long waiting and watching the workers lay each and every slab of steel it was finally finished. These men who work long days and hard weeks can look down at their hand covered in blisters and calluses and know that because of them other are thankful. As the first train passes along these tracks, the onlookers of their towns rejoice for now the east and west are connected.

The train goes by once every two weeks on Thusday, just after 2. We know the conductor, Henry; he blows the whistle when he passes our place. We can hear the train coming from far off and we have plenty of time to get out where we can wave to Henry as he passes by.