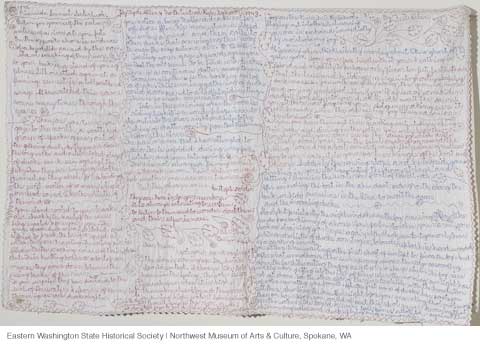 Feb. 6 '46
Bangor, Wash.
Dear Mom,
I got your card saying the river is coming up. Gee, I wish I could see that. I always like to be home in the Spring. The water is so much fun when it is high. Remember when I found the goose during high water?  I always enjoy those trips up the river with the current so strong that I have to put my strength into the oars to move. Clyde

There once lived a boy with a dream. This was no ordinary dream. This dream was something boy wanted to turn into realality. This dream was world peace. Every time this boy had a thought on how he could make this dream come true he would write it down in his little journal. The boy would always cary the journal around with him so that he knew he would never miss anything that could possibly help him achieve his dream. Then one day when he was on the last page of his journal down to the last line, he found it. He found what it would take to make his dream realality. But this would take much work from the boy. He was going to teach others how to put others before them so that that way everyone would start being nice to eachother. When everyone is nice then there is no problems, without problems you can acheieve world peace at last. But the boy was only a boy. No one wanted to listin to what a littl kid had to say. So the boy kept getting rejected by all. His dream wouldnt be reached.

My brother wanted to move out at 18. He said he could handle himself. My mother wouldnt let him go said he was not ready for the responsibility so he inlisted in the airforce and left to training. He endured a lot of blunt reality checks and thats when he realized that mom was right and wrote a letter to apologize and thank her for everything she had done and said to him.

Times were tough. all the men or boys had been plucked from their homes and sent off to war. hoever every week they were allowed one letter to home. It was springtime now and things were changing.both at home and on the front.