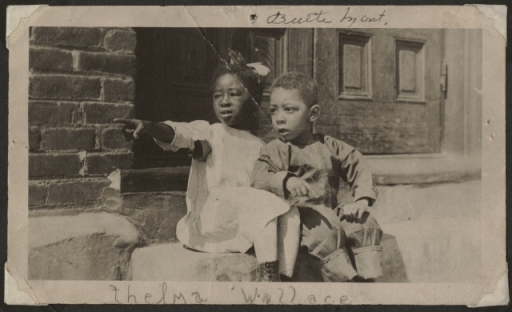 They used to sit out on the stairs and watch the parade go down the street. Every year never missing one. Now as the two siblings are older they still go out and sit on the stairs of their old house and watch as the parade goes by. This is a sort of renewal of friendship between the two, always enjoying the company of the other. They will always cherish and remember these times.

This image show a couple of young kids sitting on the steps in front of there house enjoying a hot summer day. Looking at all their surroundings. Victoria and Anthony have been friends since they before they could walk. They have been there for eachother whenever they needed someone to talk to about a problem in life. The image to the right shows Victoria and Anthony in there older years sitting on the same steeps looking back on their childhood memories and missing the good old days. A time when they didn't have a care in the world all there focus was just to have fun with friends.

In the image of the right are two young children pointing somewere like surprised ,and in the second one are the same persons but now they have grown and now the are like 40 years old and ther are pointing to the same way

They sit on the stone steps. Her, pointing out something in the distance and him reminising. This scene from years ago when both were younger and she had been showing him something in the distance, pointing. They have been together this long, grown together, changed together and that bond holds strong, because some bonds can't be broken and no matter how far you go, you can always go back to where you started. Maybe as a different person but that is what makes the Hagin Family Album photographs so special. The pictures that capture those moments where past and present come together and show future.

Thelma was always responsible for her little brother. Her mother always had her looking after him, taking him along with her, and standing up for him through the tough times. Now looking back on the times that she once hated, she learns it brought them so close that it created a bond not even god himself could break. She was grateful for his company, love and assurance. However now instead of him walking in her footsteps, she lingered in his. Never far enough behind to fall apart...but always close enough to feel the warmth.

This picture is a very interesting picture. It shows a little girl showing a little boy something in one picture, and in the next picture it shows the same picture but while the people are grown up. This to me shows the unconditional love that these people have for each other, whether its as brother and sister, or if it's as friends.

I remember when me and my brother would sit on our front porch and listen to everything in the summer time, it was just like yesterday when we were sitting outside and listening to the birds when he told me that he wanted to go to war. I told him that you will be oa changed man when you come back from war, but he doesn't want to listen to me and he went to war at 15 and came back at 19 a changed man when one day after the war we sat on the porch he said you were right i have changed but i still love being with you on this porch.