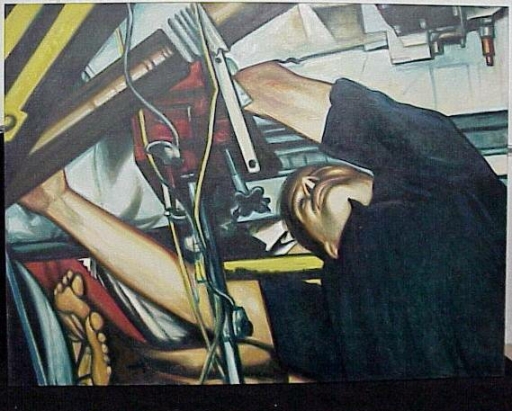 I see a little bit different picture that most everyone else sees apparently. I see an EMT adjusting some equipment for his patient in an ambulance. Thr red box near the center is an IV machine and you can see all the tubes all over the place.Although it is an ambulance and there should be some sense of emergency, the colors used seem calm and almost happy

One bright and sunny day, adrian came home after a hard days of work. He was tired so he decided to lay down and take a nap. At around 5pm he woke up and decided that he needed to get back on his project. He was building a project honda civic. It was a old 93 civic hatchback but he knew he could turn it into a fast racer car. His stock engine has been removed and he was putting a 2.0 liter k20 engine from a brand new civic. He just remebered he needed to order brand new engine mounts. He walked into the garage and took a look at the car. It was fully stripped and still needed a good paint job. He called his home boy roman up and they began to start work. He put his overalls on and they started work. As he cleaned up the engine bay and cleaned the firewall, his friend put the k20 engine on a crane. As pictured above.

AAAAAAAAAAAHHHHHHHH!!!!!!!!!! my arm is stuck inside this contraption. Why did I stick my arm in here?!?! Ya, i dont know either... All i know is that my arm is stuck and it really hurts. Maybe i should chew it off so i can get out of here like a mouse would that is stuck in a mouse trap. I wish i had some lotion to get my arm out of here. O well, at least I still have my right hand. It's my strong hand!

The two mechanics are working hard inside their shop. Their customer wants the job done as soon as possible. Their job is to put together the totaled car. The effort is so great that the customer decided to paint them as they worked. Showing the hard work all over their faces. The painter strained to try and show the audience the emotion of the mechanic to let the audience feel like they were there with the mechanic and could feel his emotions.

This looks like two best friends bonding together learning what to do with an old car. His friend is lounging his feet under the roof of the car, while Matthew his best friend teaches him what to do. Matthew looks very into what he is doing, and concentrated. The colors and shapes make it to look like they are sitting in a hot garage working long days. Matthews's sleeves are rolled up and Jaime's shoes are off, before the day gets too hot they take a brake to bathe in a close by pond.

Two men work inside the close quarters of a boat interior. One worker can only be seen by his feet while the other stretches up high to make an instrument adjustment. A recent storm has thrown the boat around and only with the knowledge and swiftness of the men can the boat be put back into working condition so they can return to port.