Life While You Wait 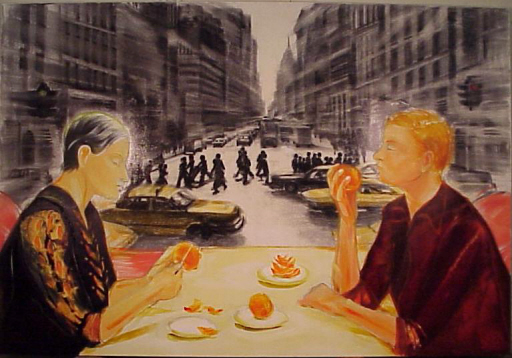 As life passed by in a dark blur outside the window, the woman cut into her orange, and sighed. "I wish this was an apple."

Savoring the orange and apple, creating blossoms ot of the simple things, bsiness in the backgrond contines in the fast lane, bt not paying attention to it and focsing on the present

Once upon a time in the near future, there was a restraunt that only served organic fruits as thier main courses because of the new organic hype that everyone was talking about and bragging about how healthy it was. So, one day little dan was very hungry and wanted to get something to eat, but his only problem was he didn't have much money to feed his hunger. Luckily these new organic fruit restraunts were quite cheap and you could get alot of food for not alot of money. Even though little dan didn't really like fruit, this offer for some food was very appealing to him. So, he walked across the street and into the organic fruit restraunt. The resraunt was called "frute' de organic" it was somewhat of a spanish name considering it was owned by spanish speaking folk. Once little dan got a seat he opened up his menu adn began to read down the least of organic healthy fruits. Right in the middle of reading he looked across the room and noticed a couple was eating a orange. It looked gross.

there once was a lovely couple. who met about a few years ago.they sat along the street eating lunch. little did they know that there was so much going on. the man went on a buisness trip and he got back that day. the woman was so excited that she wanted to meet with the man as soon as she could. so they went out to lunch and cought up. but later that night the man had to go back to work. the woman was so sad. but they ended up living hapily ever after.

It had been a long time since Kate and Oliver had seen eachother; seven years to be exact. They had dated all through high school and everyone swore they were going to get married someday. Then Kate's parents had forced her to move three states away to attend college, leaving Oliver behind. Oliver wanted terribly to follow her but did not have the money to do so. They had no choice but to break up. Kate continued on with her plan to become a doctor and Oliver continued with his to become an artist.

One fall day Kate decided to go back home to visit her parents. She arrived and decided to go for a walk around her old town. Some things had changed but most was exactly the same. She decided to stop by one of her favorite resaurants and have lunch. Then, when she least expected it, she was him. At the same moment he saw her too. They just stared at eachother for a moment before Oliver walked over and sat down across from her. They said their hellos and began to catch up.

They met back in first grade. One of them was new to the town. They couldn't stand each other though. They would scowl at each other from across the table as their mothers conversed at the town's Senior Sorority meetings in the French Cafe on Third Avenue. But on one peculiar day they both wondered why they didn't like each other and they couldn't come up with an answer. They decided to give each other a try and started talking. They haven't stopped since then. Now into their 70's they still meet at the same cafe where they first met and are best friends. They just sit and enjoy each others company and sip coffee and eat fruit filled pastries.

My story begins when I young like 5 years old and I went to visit my grandmother on my birthday because she told me that she was going to give me the best present of all the others that I alredy have get that day, and I was like oh yea I will have the best present in my hands ,then she said sit in your chair and eat the food that I prepare for you ; adn I said ok , I could still remembrer what it was it was like my grand mother call them "Frijoles refritos(beans) and tortillas de harina (flour tortillas) and they were so good... And after I finish them she said does my present like to you and I think which present and I realise that the food was my present then I answer to her yes I like it. It was really the best present of all on that day. But now I cant do that anymore becase now I live here in moses lake and she was in mexico but the worst is that now she is dead and now I cant make her come back but anyway she told me something before se die "Dont waste you time"

After a long days of work Bobby makes plans to enjoy some fruit in a restaurant with his mother Sue. It has been so long that they have seen eachother that they feel a little aqward being around eachother. He has been so busy with going to college and her going to work and all. As time passes they begin to chat it up a little. Talking about the weather, traffic and everything going on in the busy city of New York City.

I met my grandmother in the middle of town for lunch. She had previously called me earlier in the day and asked if I was hungry. I eagerly admitted I was, so she invited me to head to her favorite restaraunt and eat. As I entered the resteraunt I saw my grandmother in a window seat and the city was in plain view outside. As I sat down she raised her eyebrow at me and asked me if I had been eating well since I had last seen her. My response to her statement was simply my head shaking back and forth slowly. She sighed and reached inside her back and pulled out several oranges. She then reached for a knife on the table and began to cut the oranges into slices. She then began to push the oranges towards me and repeatedly told me to eat to recover any lost strength. Truth be told I wasn't in the mood for oranges so I reluctantly took the fruits she was handing me and I began to eat them quietly.

There are two ladies eating breakfast early in the morning talking about what has been happening with their life's this past years. Back in when they were in the high school they hed been best freinds told their deepest secrets to each other. And now they hadnt seen each other for over 15 years. Finally they see each other!

the story of a man who ate the same thing at the same restaurant for all his life, a peach.

This is a small town, very busy, early a Saturday morning when two friends sit down to enjoy some fresh fruit. People are on their way to work. the two friends planned to meety at a diner for an early breakfast. they havnt seen each other for over ten years and their there to catch up on old time, and new over some food in a nice diner, currently waiting for their food to come, they enjoy the appetizing fresh fruit on the table. They have no where else they have to be so, they eat slowly, enough time to catch up and discuss when a nice time to meet again was in the near future.