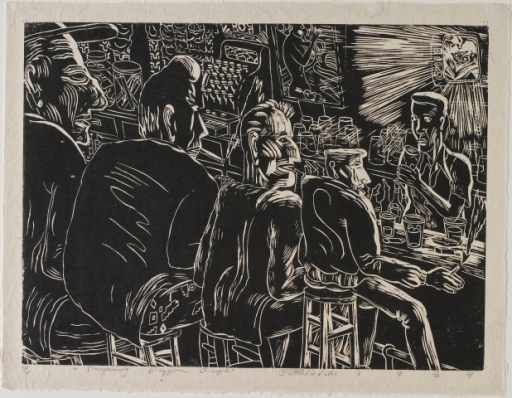 This picture consists of a story,

As the guys are drinking some beer watching television not speeking and the guy behind the bar is making the drinks for the older men.

6 oclock,off work finally.Its been a long hard day at work.Four friends clocking out each with a 9 houre day under there belt.No words are spoken just the sound of 4 old tired men walking out of a tired old factory.The men dont go home,it's friday thay head straight for the place,there place.The one place thay all can sit back and finally relax.there going to the bar.It's a short walk a block or two.The four friends walk up to the door.Thay can all ready hear drinks being poored a game of pool being played.The oldist and biggist friend pushis open the old wood door.The sounds of the bar explode around them.The four make there way through the men and weman till thay are finally at their spot.The front of the bar four stools sit,waiting for this moment.The men take their places on their stools.The small man lights his cigrett.The bar tender walks up to the men,a smile breaks out on all 5 mens faces.A round of there drinks are brought to the bar.Each raises a glass a drink to friends.

My grandpa was a bitter old man that would go to work and come home drunk. He was never a vert nurturing person. after he would get home from work he would drop his things off and go to a local bar down the street and get plastered. He would go there on the weekends also. It seemed like he was never home. A few of his friends would meet him there and they would drink and talk about their pathetic bitter lives.

All four have had really bad days, and now was time to compare. "My wife said she wants a divorce," said the first one. "Oh Yea, well my best huntin' dog died!" said the second. "you'll never believe what happened to me," said the third

This is a weird picture because of the reverse color effect but it is very unique. These four men are all just sittin and watchin tv. i bet they're watching cops. But this first guy is smoking a ciggarette so here will most likely die due to lung cancer in the near future.

I agree, wonderful stark contrast in this! Although I get a different feeling...guys sharing beers, watching a game together. They may all be staring straight ahead, not looking at each other, but sometimes, that's how guys commune.

The juxtaposition of bright white lines against the stark black background is very striking in this image. Multiple white-line scratches show noise blaring out from the TV behind the bartender's head. Each of the four progressively bigger guys seems to be staring straight ahead at the TV, not looking at each other. I wonder what they are watching, if they come to this bar often just to sit, to be part of a group, but not necessarily to interact. The use of line to depict this scene is marvelous and, for me, adds a feeling of separation.

I believe the biggest one is thinking he'd like some of that beef jerkey.